When I was in Hyderabad 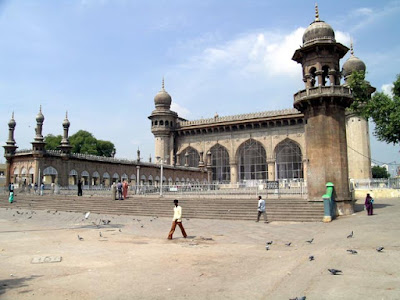 When I saw flash on television about Blast in Hyderabad, my mind goes two years back and I remember each and every minute that we spent in Mecca Masjid and Charminar.

Coming back to topic of Mecca Masjid, it was built by Aurangjeb around 400 years back and it is India’s second big Masjid after Jama Masjid of Delhi. Capacity wise around 10 to 12 thousand Muslims can pray Namaz at a time in this Masjid. This Masjid is fully crowded and some people pray on roads also when it is Jumme ki Namaz and Namaz during month of Ramzan. That is the reason why terrorists selected Jumma for blasts. 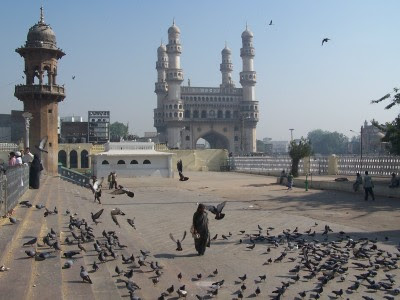 One of the largest mosques in India, Mecca Masjid has a capacity to accommodate about 10,000 worshippers. The biggest mosque in Hyderabad, Sultan Muhammad Qutub Shah started the construction of this mosque. The works continued during the reigns of Abdullah Qutub Shah and Abul Hassan Tana Shah and was finally completed by the Mughal Emperor Aurangzeb in 1694. It has special hall for Muslim women to pray. When you enter in Masjid there is specially built water tank for devotees. It is expected when you go inside you should wash your legs and hands. Even Hindus can go inside and get informed about things there.

This Masjid is just near to world famous Charminar and Laad Bazar, which is famous for Bangles and specialty of Hyderabad that is Motis. One more specialty of this area is that as Muslim population is more there are so many hotels where you will get best Biryani during full year and Haleem in the month of Ramzan. In this area only lot of workers are engaged full day in preparing silver foil, which is, used in decorating Sweets and other delicious food. So whenever you go in that area you can hear voice of hammering and see lot of shops beside Mecca Masjid.

We used to go in Charminar area once in two months. All (Myself and My roommates) of us are fan of Biryani. Shadab, Pista and Madina are some prominent Biryani Houses there. We use to go there and enjoy biryani. After biryani one special item we liked to eat. That is `Krubani Ka Meetha`. So whenever we go there we used to visit Charminar, Mecca Masjid and Laad Bazar. We used to go here and there enjoy the feel there and then eat Chicken Biryani. This is the reason why we went near about seven to eight times there in Mecca Masjid. 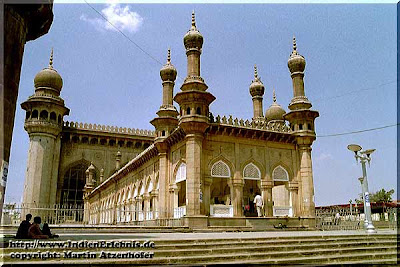 There were some police persons and security guards around Mecca Masjid area. But you cannot imagine that, not a single security person is there to check the persons who are going inside for Namaz or whatever be the reason. This is the flaw and terrorists take advantage of that. After Malegaon blasts also security was not tighten there. This might be the reason for blasts, which took, place today afternoon.
I think this is happened just because negligence of state government and State Police Force.
द्वारा पोस्ट केलेले ashishchandorkar येथे 6:39 pm

GIVE EVERYONE MORE INFO ABOUT MASJID LIKE IT TOOK 7 years to build or anything that you want to share on masjid and what happened today and what would now be now onwards in HYDERABAD OR COMPARE IT TO GUJARAT, BARODA, PUNJAB, UP, ASSAM, or SOUTHERN INDIA's STRUGGLE with external extremist forces.If you write on this, i guess people would be more interested.

this post refreshes my sweet memories spent at that place.. esp charminar and laad bazaar.. never been to Mecca Masjid though... but what's going on now there is really bad.. i guess it's time that the security should be tight there since a lot of ppl go there for Namaaz.

Nice write up Ashish,Keep it up.

I am sorry ashish, to be frank i think u need to write in more detail.. Its interesting to see you write on mecca masjid but its very vague and hyderabad is not divided based on caste.. Every one is friendly and both religions coexist.. It is these political parties which are dividing the place.. and charminar is no more the centre of city.. it was some 10 or 15years back.. Hyderabad has changed a lot over years.. Its no longer a place where ppl fight.. its much a better city.. i am sorry if u felt offended but this is the city i have born and when some one writes about it in a way tat it is not.. i felt bad.. there is much more that u can write on this specific issue.. Hope u take my advice in a positive note..

Jadu if u r getting good comments on ur improved english writting from anil takalkar sir, ur simply gr8 yar. But especially the writeup also wonderful. Keep it up ..All the best for ur english Journalism