Mr. Prime Minister you are WRONG!!! 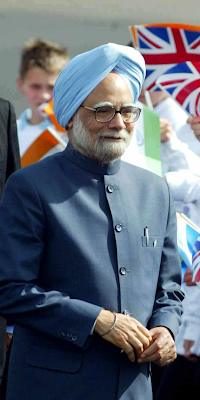 Thank you, Prime Minister for clarifying the thing that minorities have first claim on all Natural Resources.
Till date we thought that according to our constitution everyone is one same par. But this thing is correct in constitution only and some people have more advantages as they are from minorities or from lower caste. But when there is lot of criticism from all corners of the country then Manmohan Singh took U turn and claim that I didn’t said this thing and Media has twisted my statement.

This thing came in to picture when he spoke just like congress leader on last Saturday. Controversy began when he said that MINORITIES MUST HAVE FIRST CLAIM ON RESOURCES. He was speaking at Chief Minister’s conference in New Delhi.

Everyone has heard his statement on Television, at least I have heard and seen it on Times now and other news channels. There was no twisting or no editing in the story. That’s why one can easily understand the feelings of Prime Minister. As he is from congress party everyone know what will be his ideology but this statement was not expected from a man like Manmohan Singh. As he changed the face of India’s Economy and who lead India in globalization process, this was shocking statement.

As we are becoming as global village how can anyone claim on education, Service and other resources just because of he is from minority or he is from lower caste. There should be two criteria’s only. One is talent and another is economic backwardness. If you are talented then no one can stop you from progress. If you are economic backward and still you are talented then you should get some financial help or reservation things. But other wise every thing should be decided on talent only.

This is the only reason why not a single ‘so-called secularist party’ dares to protest against the minorities when they denied singing of Vandemataram. Congress Chief Minister Gulam Nabi Azad (Jammu Kashmir) demands that Mohammad Afzal should not be hanged. But congress claims that this is his personal statement and party doesn’t want to comment on it. How can a Chief Minister comment on such issues so casually? Or you just want to attract minority community from Jammu and Kashmir toward congress?

Bhartiya Janata Party has its own image about minorities. Image of BJP is pro Hindu and anti Muslim or anti Minority. They wanted to change their image. That’s why Atal Bihari announced in his political speech that Two Lacks Urdu teachers would be recruited after Polls. Advani goes to Pakistan and claims that Jinnah was Patriot. Bangaru Laxman announced after becoming BJP’s president that Party workers should give up their animosity towards minorities. This message is good but party president declaring this is serious. You are doing this just to attract minorities and nothing else is clear from this. So BJP is not a party with difference in this case.

I don’t want to comment on Rashtriya Janata Dal of Lalu Prasad Yadav, Samajwadi Party of Mulayam Singh Yadav and Bahujan Samaj Party of Mayawati. These parties are limited to certain part of India and certain community.
So, Mr. Prime Minister you are wrong and you are not there to divide the people on caste and religion. If you do that you will lose the your place in many hearts.
द्वारा पोस्ट केलेले ashishchandorkar येथे 4:53 pm