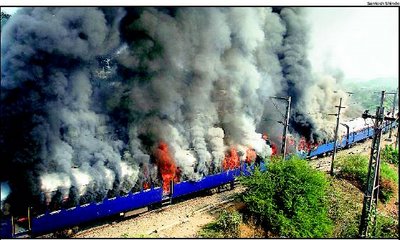 Babasaheb, Look at your Followers!

Dr. Babasaheb Ambedkar, one of the most talented men of India. But unfortunately he has become most controversial man of India now days. Many time some thing or other is done to statue of Babasaheb and the violence starts. This is the normal thing now.

Kahirlanji is the small village in Amravati District in Maharashtra. Incident happened in this village is the reason for all the violence happened in Maharashtra now. Incident happened in Kanpur (Vandalizing the statue of Babasaheb Ambedkar) was just a reason to start the violence. But the anger was of the Khairlanji. Both the incidents, Kanpur and Khairlanji were not only wrong but everyone has to condemn both. After that all the Dalit leaders and party workers of various Dalit parties come together and joined the violence. This type of violence was started after Ghatkoper case few years back. All the Dalit leaders and Republican Party workers were came on roads and started violence.

In Khairlanji some miscreants raped one dalit woman and then killed three persons including that woman. After that violence started in many parts of Maharashtra. That violence was because of the anger that state police did not handled the case properly. Reaction of the Khairlanji was not that much serious and police brought the situation under control very quickly. But reaction of later incident was harsh. Rather it was the anger of Khairlanji after incident of Kanpur.

Though Kanpur is far away from Maharashtra reaction that came through out Maharashtra was unexpected not only to peoples and political parties but Police also. That’s why no one was prepared to face this situation including police. That’s why the violence was one of the most severe in the history. May be first after Name change controversy of University of Marathwada.
Everywhere violence started on Wednesday and public transport buses and private vehicles were the main aim of the protesters. But unfortunate thing of this time is that protesters burn the Pune-Mumbai Deccan Queen at Ulhasnagar. This train has great tradition since British Empire and it was the pride of all Maharashtrians. But this train was set afire by protesters was unfortunate. Everyone can understand the emotions of the dalit’s after Kanpur incident. But this doesn’t means that they have right to do anything in the name of protest.

There are so many trains, which go from Pune to Mumbai and vice a versa. But protesters selected Deccan Queen has another reason. This is the train, which was famous for elite class traveling. Traveling by Deccan Queen was prestigious for so many years. This thing may be in the mind of protesters and they burn the pride of Maharashtra.

Another thing is that after some months there are election of Municipal Councils and Nagarpalikas. Keeping eye on that no political party condemned the violence spread by dalit protesters. Everyone want votes of dalit community and to attract them everyone is pleasing that community. Government could bring the condition under control much quickly by giving orders to police. But it heard that there were orders to police that no counter attack on protesters. No firing to brought situation under control. This is the reason that protesters go on and on.

Babasaheb Ambedkar was a great man, but his followers are nothing but useless. No one wants to become well educated and contribute to the society. There is some exception for this but they are so much less in numbers that others side of uneducated, poor and jobless peoples is the introduction of dalit community. If we start to count the experts and well-educated peoples from this community then one can get idea of the less numbers of peoples. Dr. Mungekar and Dr. Narendra Jadhav are two names, which came quickly at tongue. But to go beyond this one has to think more.

That is the condition of dalit community. Dalit leaders are also hopeless and do not want to do something constructive. They just want become minister and for that they can do anything. They can go with congress and if they don’t entertain they will go to Nationalist Congress. While doing this they will forget that congress has rejected TICKET of election to Babasaheb. Dr. Ambedkar fought against congress for whole life but Republican leaders forget this factor while joining the congress government.
There are so many fraction of Republican Party and every leader is against other.

But emotional issues are more popular in dalits and not serious issues. That is the reason this poor quality leaders are leading the parties. Of course they have mass support but no one try really for the peoples. This is the worst part of the politics. Unless and until dalit community will educate and try to develop their own future, no one will come for their help and this things will go on. Today it’s Deccan Queen in the name of Kanpur and Khairlanji, next time it will be some other reason.
There may be some different opinion on this and every one can write their views on this blog may be positive or negative. So please read and write your views on this.
Thanks.
द्वारा पोस्ट केलेले ashishchandorkar येथे 11:55 pm

nice article. agreed that the dalits are not educating and moving ahead in ife but then your reaction about them is wrong too i think. you think deccan queen maharashtrians pride, so burning it hurt you. ence Baba sahebs statue is their pride, defacing it hurt them. so they hurt you where it hurts you most. anyway, thats my opinion.

Personally I believe as an active and rational mediaperson, every Indian on a whole are responsible for every wrong happening today. If u take GANDHIGIRI, that has come back is not Gandhigiri. It is SONIA GANDHIGIRI on which Congress and others are trying to encash vote banks.

Again, if you think about India as a whole then still its real population is in rural areas.. who have situationally got converted to dalits and the real dalits(people below poverty line) have been deprived of their rights. Same is true for muslims, sikhs, hindus, christians. But whatever has happened in Kanpur/Maharashtra or is happenning is not the right way...

This fucking media, is very biased. If it happens in other parts of India then these so called media intellectual package it as national issue; but if it happens in Gujarat then they package it as HINDU-MUSLIM issue. They are absolutely bastards. Did anyone notice star news when Deccan Queen was burnt? Did anyone notice that, the bogie of this train which was shown in every news channel was only SC6(same number that of SABARMATI Train of GODHRA RIOTS)?

If it is really a genuine rebel of dalits to show their feelings for BABASAHEB AMBEDKAR, then on one hand we should appreciate their unity; on other hand it is dangerous to democracy. If dalits want reservation in all fields then only genuine must get it. But again Personally I believe, THERE SHOULD BE NO RESERVATIONS FOR ANY INDIANS IN INDIA. EVERYTHING MUST BE ON MERIT ONLY.

If we look from other aspect, if Kanpur started it all, then Maharashtra has the most of the followers (buddhists) of Dr. Ambedkar and they love their leader. But Again It is again wrong to consider a man with genuine and extraordinary qualities as GOD (which dalits are considering). Man worshipping must be stopped at any cost. Be it Ambedkar or be it Mahatma Gandhi or Swami Vivekanda. Becoz GOD IS NO WHERE BUT IT EVERY ONE'S HEART.

NB: Grassroot of any problem India since century is population corrupt people no matter what caste, what religion and no matter how many Babasaheb and Gandhiji take birth for betterment of we Indians, We will be slaves and only slaves. First Moghuls ruled India, then french, portugese, britishers. Now bad politicians and gora boss of MNCs in India.

good article,what are the reasons behind dalit's anger is? it mere political or more social or economical? we should search for these reasons..in many part of country untouchability still in practice..in my view post khairlanji violence is just political not else...

Article is too informative. Good Aashish. Keep it up. Lage Raho..But from Lage raho I wanna say something If Dalits wanna keep Babasaheb's principle alive then they should keep BABASAHEB in their Hearts. Are Rakhana hi hai to unko apne DIL mein Rakho na. Y to create violence.

A very naive understanding of the events. If you would have cared to talk to any protester , u would have come to know that it wasn't because of the desecration of statue or lynching of the dalit family, it was because of the casteist response from state police and RR Patil. The reinstatement of statue did not stop the protest, it was arrest by police of men who had committed the lynching and rape of dalit family that stopped protest.
In how many cases in India, rape charges have been dropped because dead bodies had rotten in police custody beyond the point to check signs of rape or police did not think to check signs of rape where genitals of every deadbody were mutilated?