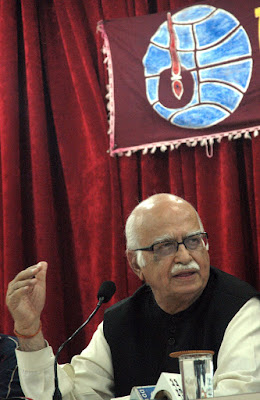 Six feet tall, Fair in colour, old but not tired, good command over English and ready to face any situation... This is the image of Lal Krishna Advani once again emerged in pune. I had got opportunity to meet Advani twice before. But there is no change in his personality.

Thanks to Pune Union of Working Journalist, Who gave opportunity to meet and interact with opposition leader in Lok Sabha Mr. L. K. Advani. Of course Presidential election issue was the crux of his speech and that issue was highlighted the question answer session.

In his speech he touched all the issues including presidential candidates, why NDA is opposing Pratibha Patil, why Bhairosingh is contesting election as independent candidate, what was the quality of election campaign between Neelam Sanjeev Reddy and V. V. Giri. Many statements of Advani were already published in media so there is no point to give all that discussion here. I just want to give some of my observations here.

The person who comes on time is not a politician is the common definition of leader. Many leaders including Bhartiya Janata Party are `Late Latifs`. But Mr. Advani seems to be exception to that. Program of Meet the Press was at 4 pm. But Mr. Advani was present at Patrakar Sangh at 3.45 pm and he came to the dais at 3.55 before the time to start.

In the beginning of `Meet the Press` program, secretary of PUWJ Mr. D. R. Kulkarni gave instruction to all journalists to switch off their mobile phones or to keep them on silent mode. Interesting thing to observe is that taking cognizance of this instruction Advani immediately brought his mobile out of his jacket. Switched it on silent mode and again put in pocket. In many other programs you can see that those who are on dais are reluctant to instructions including all the politicians. But this is the uniqueness of leaders like Advani.

Advani is in active politics from 1952 and he also told that thing in his speech. One journalist asked him about Shekhawat that Mr. Vice President is using his office for campaign. That senior journalist told Advani that Shekhawat is using telephone in his office to call MP’s and MLA’s for the campaign. Within the fraction of second Advani replied that could you please tell me the single person to whom Mr. Shekhawat has called from his office. Advani informed the house that Mr. Shekhawat has installed separate phone line in his office only for the election campaign purpose. He is using that line for his campaign.

It is a well compiled writing and thanks for that I will use link to this from our site http://www.thesindhuworld.com/bio_lkadvani.htm
[soon will be updated] if you permits for it.
Any way thanks for a good article.

Good article. great work
It would be even better if you could add a translator software on your blog.

u have written very fine and easy artical on advani....
i always think that articals in english r very boring, critical and heavy to understand.....
obivous news is another part....
but your language is very easy and fine..............
thanks that you are giving me the opportunity to read your observation about advani...
basically advani is my favourite politician.