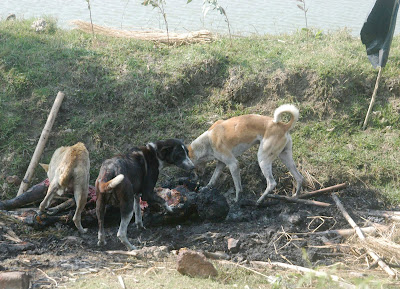 Stray dogs feed on with a charred human bodies of people killed in a political clash at Sonachuri area of Nandigram, 150 kilometers (95 miles) north of Calcutta, India, Sunday, Jan. 7, 2007. Six people were killed and scores more injured in clashes between villagers and ruling Communist Party members in India's West Bengal state in a dispute over the acquisition of farmland for industrial purposes, according to agency reports.
द्वारा पोस्ट केलेले ashishchandorkar येथे 7:25 pm

Its so disgusting to see such things!