About Marathi and Maharashtra… 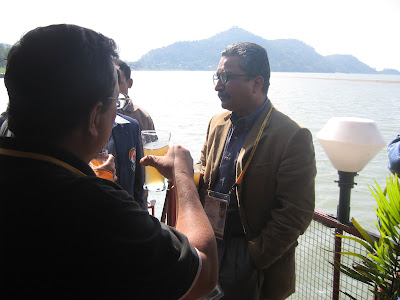 This is View from Cruise while Enjoying home made Rice Beer. 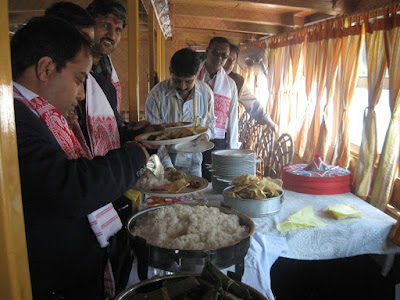 In Assam I also experienced that those peoples have lot of respect and love towards Maharashtra. Specially Pune and Mumbai. They are also much crazy to know more Mumbai and life style there.

I met Mr. Punjab Sharma there. He was working with Brahmaputra Water Works as Engineer now. About 10-12 years back he was in pune in CWPRS. That time he used to stay near Swargate. He told some memories of that time to us and we were amazed. He told us some specialties of pune like Naaz (Samosa Special), Poona Café House, and Bakarwadi of Chitale Sweets. I was not expecting such experience in Assam.

Pune and Mumbai are much familiar in Assam as so many students from Assam (From Northeast also) came to Maharashtra for education in the past. Now also figure of such students is high. That’s why they know much more about Mahrashtra and they told us that Marathi peoples are good and have helping nature.

When we go to one village in Nalbari district we gone for Tea on one Tapari. There the owner made special tea for us and serve the with song

We told that, salam bilam mat karo yar. Then he told that you came to our village form such a long distance that we have to salute you. When we speak with other peoples then they told us that nobody from outside Assam was gone to that village. That’s why they were much more happy. We were amazed with their hospitality and love.

We enjoyed the village food there in the night. Chicken with special Assami taste, Chenar and Rohu fish, rice with kali daal was the menu for dinner. Food was so delicious that I ate much more than my capacity and still no problem on next day. Wah! Kya Baat hein!!

Northeast has some special features and one of them is that people from NE want to keep their special identity. This thing comes into picture at opening and closing ceremony of National Games. Other incidents also show this fact. In Guwahati there is one statue of Lachit Badfukan. He is the Freedom Fighter of Assam and fought against Mughals. He stopped the Mughals from entering in Assam. One volunteer Botipon Malakar was with me in jeep and he showed me that statue.

He asked me you know Lachit Badfukan? Fortunately I knew the name and work of Badfukan. When I told information about Badfukan to him. He was so delighted after hearing me that one cannot imagine. He took my hands in his hands and hugged me just because I knew about Badfukan. He told me that nobody from outside NE knows about Lachit. But you are from Pune and still know Lachit this is great for us.

Pullok Mohanta was transport committee president during national games. One day he asked me about Balasaheb Thackrey. I was surprised after hearing word Balasaheb. I was thinking that he wants some information about BMC elections. But he was not interested in that. He told me that ``He was lost in Dadar when he had gone to Mumbai in his early childhood. He lost from his parents and was started crying. Then some shivsena workers took him to home. Gave him food and water. Inquired about his parents and then searched his parents in nearby areas. In few hours they found my parents and we came together again.”In that sense I have some different remembrance about shivsena.
द्वारा पोस्ट केलेले ashishchandorkar येथे 10:52 pm

you know what? assamese are good at heart but these same buggers are very egotists, short tempered and jealous people... and the same ego has laid them back and isolated from other cultures and world...

One year of stay in Assam or north-east made it easy for me to opiniate about the NORTHEAST Indians.

You must visit again alone in future and you shall agree to me largely.

I don't know which place of Assam you have visited and for what purpose, but to comment something like this about a culture really hurts people from the state. And my advice you should not comment something like this. I guess you are posting such comments based on some people you have came across, and not based on your 1 yr exp in Assam. Like other parts of India Assam is also well known for the hospitality towards gusts as well as hosts. Believe me no way you can comment like that. Hope you really visited Assam(India).

Thanks ashish chandorkar for such a nice post. The post would be even more better if you remove Mr. Prasad's comment above. I personally request you for the same.