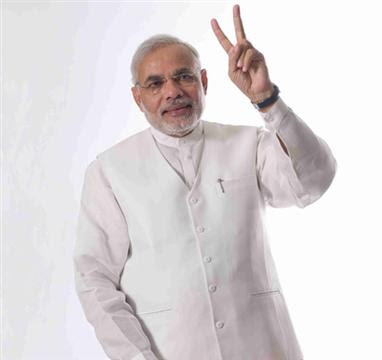 BJP will get not less 120
Now its confirm that Narendra Damodardas Modi will get majority in Gujarat and he will become the Chief Minister once again. This is based on my observation when I was in Gujarat and not on the Exit Poll results declared after second phase of elections. Before elections conclusions were drawn that because of Keshubhai Patel and other rebels Bharatiya Janata Party will loose its majority in Assembly. Congress will gain more seats that last time and they will fight neck and neck to BJP.

Though rebels form Vishwa Hindu Parishad, Rashtriya Swayamsevak Sangh and BJP stand against Modi. Congress, secularist parties as well as social organizations and so-called impartial Media tried their best to demolish Modi. But in democracy one who has public support is the king. In Gujarat Modi has tremendous public support and they are crazy for his personality. They love his speeches, rallies and his views.

When you visit Gujarat then you get realization of the fact that Keshubhai and other rebels are not that much effective. Media has made hype of it and Keshubhai is again came at the center of the elections. Actually he and his supporters were against Modi in last assembly elections also. But this time they had come openly against Modi. But CM had known this so he started his campaign from last one and half year. Interesting fact is that Keshubhai and his supporters were against Modi in Municipal Corporation, District Panchayat and Gram Panchayat elections also. But that time BJP emerge as single largest party in many areas against all odds. So BJP leaders and workers are not afraid of Keshubhai and his gang.

Another thing is that Congress party has no leader who is capable to fight against Modi. Gujarat Pradesh Congress Party President Bharat Solanki, Ex BJP MP and Now Congress Minster Shankarsingh Waghela and Leader of Opposition Arjun Modwadia are not of that caliber of Modi. He is excellent speaker, good administrator and born leader. He has charismatic personality. People are crazy to hear his speeches. Thousands of people gathered to hear him in a single Corner meeting. Modi takes around eight to ten rallies a day. So one gets idea of his popularity. BJP has created Modi Raths, where people can hear Modi’s recorded speech on TV. Hundreds of people are watching these recorded speeches on TV.

Another thing is that Congress party’s main campaign was against Modi and they never tried to give their ideas and never project any leader as their CM after elections. Congress party’s agenda was to malign Modi’s image. Instead of doing this if Congress party has gone without naming Modi then they would be in better position. Congress President Sonia Gandhi unnecessarily brought Soharabudhin issue in the elections. Digvijaya Singh called BJP workers as Hindu Militants. Because of this once again development issues gone to back seat and other issues, which favors Modi and his Party, come to forefront. This is most effective aspect of the elections.

Another thing is that last time elections were happened on the background of Godhra Carnage. So that time voting percentage was high as compared to then last elections. But this time voters come out heavily and same percentage was maintained though there was no such issue on high. The average voting in Gujarat in various elections is around 50 percent. But this time 60 percent voting means around eight to ten percent votes is increased. Another thing is that percent of women and young voters is remarkable. Modi is more popular than any other leader in Gujarat in these two sections of society.
When I visited Surat, Vadodara and Ahemdabad I realized the fact that Modi has great support and Modi’s victory is now just a formality. But all the media persons were trying to develop such a picture that he is trailing in elections. But when results of exit polls come out everybody was amazed when they showed that BJP will get around 100 to 110 seats. But my calculation is that Modi (BJP) will get not less than 120 seats, just seven less than last time. If we consider all the factors discuss above according to my predictions BJP will loose only 5 to 10 seats in Saurashtra and Central Gujarat but they will cover that loss in North Gujarat, where Congress facing rebel candidates.
द्वारा पोस्ट केलेले ashishchandorkar येथे 4:02 pm

Good article, ashish. That Narendra Modi will take over as the Chief Minister of Gujarat is now only a matter of formality. Howsoever the media and self-proclaimed Secularists tried their best to malign and demonise Mr. Modi, the fact remains that he is the only charismatic and efficient politician today in the whole country.
I am a long time fan of Mr. Modi and am particularly appreciative of his style of functioning.I have praised his work some time ago in my blog. You might savour the article as it reflect an admiration of a distant spectator. Here is the link : http://devidasdelinde.blogspot.com/2007/06/namo-namah.html

yes, u r absolute right. just one addition, more perticularly electronic media have create such picture that Modi is trailing in election. if you observe private national channels u know what i am saying.
Wishwanath