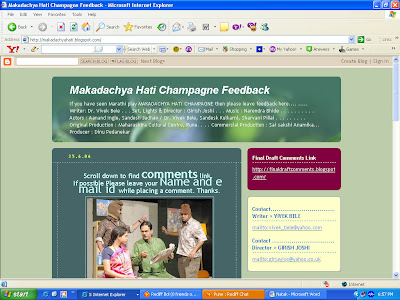 Who says Marathi Theatre is towards dying? Those who think that there is no future to Marathi theatre then they are unaware the happenings in Marathi theatre. ‘Makadachya Hati Champagne’ is the play, which popular among all age groups from last few months.

Some new subjects from society are coming to theatre and some innovative peoples are also taking advantage of new technology. Recently Girish Joshi, the director of ‘Final Draft’ and ‘Makadachya Hati Champagne’ has created blogs for the reactions of audience. Before starting play they announce about their blogs and ask audience to react there and comments on various aspects of play.

Both the blogs are created in recent months but response to the blogs is not very poor. Around 60 to 70 peoples have commented on blog of each play. Viewers of the play have reacted there about script, dialogues, acting and theme of the play. There are some good comments about play and some have reacted against the theme of play. But the thing is that viewers have commented.

Many time only renowned actors, some directors or producers and peoples related to theatre industry react about the play. But general viewer or audience couldn’t express about play. He wants to comment about the play but there is no proper platform to express. That’s why reaction of general audience doesn’t reaches to producer or director. That’s blog was introduced for reaction, Mr. Joshi added.

This type of system was recently started but it will become popular in coming days.

Dr. Vivek Bele writes this play and it makes humorous comment made on the manipulative overtures of the political mind. Political mind, because the manipulations may be designed and applied as much in mainstream politics as much in the personal relationships.The characters in the play are three roommates, of which one imagines he has found his love. The friends address each other by names they have invented on the basis of their individual personalities.

So, here we have the uncouth and aggressive ‘Chaku (Knife)’, who brings home the woman he would like to marry to meet his friends ‘Pustak (Book)’ who like his name goes by the book and ‘Makad’ a T.V channel journalist who could move heaven and earth to find news.The lady herself is unabashed about changing her mind when it suits her, and moving on with life. With no answerability to an erasable past she aptly renames herself ‘Pencil’.

The story becomes a chain of witty battles between the four characters as Pustak and Chaku both woo Pencil while Makad eggs on both individually. The duel goes on parallel to the Elections news that is being shown on TV.The two men vie for the lady’s favors just as the opposing candidates vie for public support. The media and Makad meanwhile enjoy the show as long as the bottle of champagne is not opened. Because champagne means celebration and celebration means everybody is happy which clearly does not agree with their psyche.

Then Pencil marries Pustak and things seem to come to a dead end. But Makad would not let that happen. He now convinces Chaku that he is not out of the race and that he can still have his love back.Strategies are built, manipulations galore and wit abounds. Every time there is a possibility of stability, Makad the media man becomes restless and succeeds in unsettling the situation once again.

Who gets the lady, who gets the chair? Whom does the lady favor, whom does the public uphold?In a thoroughly enjoyable laughter ridden two hours of moves and countermoves, Director Girish Joshi brings out the stark insensitivity and selfishness of the human mind in no uncertain terms.
द्वारा पोस्ट केलेले ashishchandorkar येथे 7:37 pm

ASADUDDIN OWAISI MP (HYDERABAD) : Thank you for giving me this opportunity. I rise to support the Bill that has been tabled in the august House. I have got some important points to bring to the notice of the august House.
The Sachar Committee report has been tabled in this House. It clearly states the educational backwardness of the Muslim community. According to Sachar Report, there are 39 per cent OBCs and 0.8 per cent Scheduled Caste in the Muslim community.
I support this Bill which provides reservation in Central Universities to SCs, STs and OBCs. However, I would like to know as to how fair it is to deny the benefits of reservation on the basis of religion, especially after the Government has tabled the Sachar Report in this august House which shows how bad my educational standards are and my conditions are.
I would just like to quote one point here as far as the report is concerned. Page 73 of Sachar Report clearly says, “The percentage of population of graduates, as far as the Muslims are concerned, is 1.2 and those attending P.G. courses is 16.3.” It is lesser in Muslims than in dalits also. You are not implementing these minority universities over there. But why is it that I am being denied such benefits? Moreover, the Presidential Order of 1950 contravenes the basic fundamental rights given in the Constitution.
How is it that only SCs belonging or professing the religion of Hinduism or Sikhism or neo Buddhism are being given reservation? Why not Dalit Christians and Dalit Muslims? This question has to be pondered over by the Government. I would request you sincerely, Sir, that the Government should come forward and ensure that the 1950 Presidential Order, Schedule III is amended. It says that only a person professing Hinduism or Sikhism or neo Buddhism can be classified as Schedule Caste. How is that possible? This Report of yours clearly says this. There is this argument about Muslims and OBCs. Why is it such a low percentage is there? This has to be looked into.
Lastly, about Jamia Milia University, how is that the present Vice-Chancellor wants to implement this present Bill in Jamia Milia University? Why has the Vice-Chancellor overnight changed this position? Why are we being denied such benefits? I would request you that this issue has to be taken care of. They have applied to the National Minority Education Commission also. It is pending over there. If Jamia Milia University is not a minority University, then, which is a minority university? This is a very important question. These are important points I wanted to bring to the notice of the august House.
I support this Bill. I hope that this UPA Government will take affirmative action and will not deny us reservation under Article 16(4). If people are opposed to reservations to Muslims, they should look into the pre-native history of Article 16(4). It is none other than Sardar Vallabhai Patel, who has stated `classes’ means `Minorities’. He was the Chairman of that Advisory Committee. Why are Muslims having reservations in Kerala, Tamil Nadu and Karnataka? Why can they not be given reservations nationwide? It has to be done. Literacy rate of 13 per cent of population is only 59. There is a huge difference between literate and educated persons. You can very well imagine 13 per cent of population with a literacy of 59 per cent. Hence, I would request that the Government should come forward with the proposal and I hope that the hon. Minister, when he stands up to reply would respond to this or this UPA Government has to amend 1950 Presidential Order. They have to take affirmative action under Articles 15(4) and 16(4).
Thank you.


Hi
I visited your blog you have shared amazing information, i really like the information provided by you, You have done a great work. I hope you will share some more information regarding full movies online. I appreciate your work.
Thanks
Have a Great Day
Watch marathi Movies Online