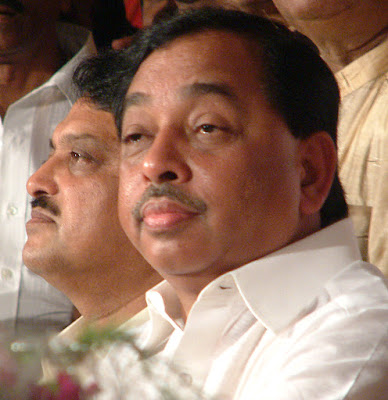 Another set back to Shivsena and Bhartiya Janata Party alliance. After Konkan now in vidarbha also Rane has successfully won the by-polls. Shivsena lose their strong holds like Chimur and Daryapur in these by-elections to congress candidates who are supporters of Rane. In Chimur Vijay Vadettivar and in Daryapur Prakash Bharsakhale won the election and secured their birth in the Legislative assembly.

After resigning from Shivsena Rane joined the Congress and became powerful leader there also. He got the active support from Congress state president Prabha Rao and Margaret Alva. Though he got support from other congress leaders Chief Minister Vilasrao Deshmukh supporters as well as old congress leaders and Nationalist Congress Party were not very much happy with winning of Rane in by-polls.

Rane won the by-polls of Malvan and Sawantwadi in Sindhudurg district. That election showed that sindhudurga is strong hold of Rane and not of Shivsena. Then Rajapur and Sangmeshwar from Ratnagiri district were also gone in the favor of Rane supporters. But Shivsena gave major jolt to Rane when sena won the Shrivardhan and Mhasala seat from Raigad. Here also Shivsena won with the help of peasants and Workers Party and Nationalist Congress Party.

After this five by-elections Rane supporters viz. Vadettivar and Bharsakhale resigned. This time battle is out of Konkan. That’s why everyone is interested to see how Rane factor works in Vidarbha also. In this by-election only Bjp-Sena got into dispute when both the parties wanted to contest from Chimur. Chimur is the seat with shivesena from last 16 years. Though Vadettivar has joined Congress, there should be no challenge to claim of Shivsena for the seat as per unwritten rules of alliance. But Bjp wanted to contest that seat as they thought that their candidate is much stronger than Sena and it would win definitely.

Both parties not agreed to take one step back. But after some meeting shivsena handover the seat to Bjp. Nitin Gadkari and Gopinath Munde made prestige issue of this seat and after all Bjp Candidate lost to strong Vadettivar. Of course there was no scope to sena Candidate in Daryapur as shivsena workers had joined the congress and there was so many differences in remaining sena leaders. So it was supposed that there is cakewalk to Congress candidates and Rane supporters in daryapur and Chimur.

But during the campaign unfortunate incident of Khairlanji happened and angry dalits came on streets. In Chimur and Daryapur percentage of dalit voters is considerable. That’s why some analyst was hoping that Bjp-Sena would have better chance in by-election. But Bjp workers stayed away from campaign in Daryapur and Shivsena didn’t do much in Chimur. That’s why both the seats gone in the name of Congress or in the name of Rane. After this win Rane is successfully won all the by-polls except Shrivardhan. Narayan Rane (Malvan), Shankar Kambali (Sawantwadi), Ganpat Kadam (Rajapur), Subhash Bane (Sangmeshwar) had secured their constituencies much before. Now Vadettivar and Bahrsakhale joined them. Only one left behind is Sham Sawant, who lost Shrivardhan.

Now Rane has become much more powerful in congress than a year before. His eyes are on the Chair of Chief Minister and he will get much support from rivals of Vilasrao from congress itself. There are so many rivals of Vilasrao but no one is capable as Rane is. Patangrao Kadam, Govindrao Adik, Ranjit Deshmukh, Prabha Rao, Suresh Kalmadi, Kripashankar singh and so many others. When Rane entered the congress these people come closer to Rane and anti Deshmukh Camp got power and strong leader too.

Rane is well aware of the Maharashtra and he knows the plus minus of each part of state. As he was Chief Minister and Leader of Opposition, Rane done a lot for Shivsena and Shivsainiks. He brought many congressmen to Shivsena and created a fleet of own supporters in Sena. That’s why after joining congress he got much support from Sena and Sainiks. This was not the case at the time of Chagan Bhujbal and Ganesh Naik.
Rane has good opportunity to become Chief Minister of Maharashtra as he is good speaker, strong study of laws and rules of assembly, efficient Minister and above of all that he is Kunbi (Maratha). Because of this one or other day he will definitely become Chief Minister of Maharashtra.
द्वारा पोस्ट केलेले ashishchandorkar येथे 6:01 pm