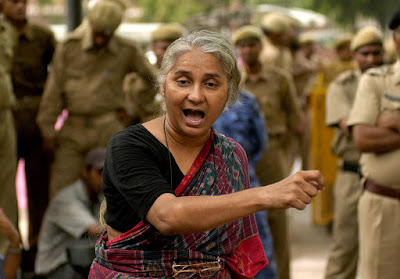 Narmada, Mumbai and now in Singur
Medha Patkar, the name that is familiar with protest, strike and indefinite fast. From last two decades Medha Patkar is associated with Narmada Dam issue. She is fighting against the Gujarat, Maharashtra and Madhya Pradesh government for the benefit of farmers and poor peoples, who were displaced from their own village.

There are always many aspects and angles to any issue. And when the issue is political, social or economical then difference of opinion is must. Narmada Dam issue has also many angles, but the important thing is that Medha Patkar gave the voice to villagers and farmers. When there is no one to hear complaints of farmers and everyone is busy with own business at that time, Medha came forward and gave helping hand to dam affected peoples.

She raised the voice of affected peoples to the international level also and brought some funds to continue the protest. Actor actresses like Rahul Bose, Aamir Khan and Nandita Das, Booker Award winner Arundhati Roy and socialist politicians are active supporters Medha Patkar.

After handling the issue of Narmada Dam for more than 15 to 20 years, she came in picture again when Maharashtra government demolished the illegal huts in Mumbai. When poor people living roadside or in slums become homeless then she started fast at Mahatma Gandhi Statue near Mantralaya. Many social organizations came forward in the support of Medha and then government softens his stand on the illegal hut issue and decided to legalize the slums till 2000 instead of 1996. There may be debate whether stand of Medha was right or wrong? Or illegal slums should be legalized or not? But the thing is that every time she comes forward to help the helpless.

Then Medha protested against the Special Economic Zone (SEZ) issue. Maan is the village near Pune. Government had plans to declare SEZ on the green land of Maan. But villagers raised the voice against the government decision and demonstrated on the streets. When there is no leader to protest then again Medha Patkar is the only name that came to forefront. She visited Maan and supported the protest. When issue was highlighted at state and central level, Agriculture Minister Sharad Pawar has to comment on the issue and he assured the villagers that no SEZ on green land unless and until farmer wants it. Of course this is the victory of people and not of Medha. But she once again proved that, she is voice of voiceless peoples.

Now her battlefield is Singur in West Bengal. Marxist government has given the green land of farmers to Tata Motors under Special Economic Zone. This is sure that in the communist regime helpless farmers cannot fight against the Buddhadeb Bhattacharya government. Mamata Banerjee has started the protest against government’s decision. Medha Patkar has also joined the protest and now singur has came in the limelight. Mamata is more violent in protesting, as Medha is not protesting with peace.
There are so many opinions about Medha patkar’s protest in various issues but the common thing is that she always gives helping hand to poor as well as down trodden people and works devotedly for them. More than that according to me one thing is most admirable is that she devoted her whole life to society and always become voice of voiceless peoples.
द्वारा पोस्ट केलेले ashishchandorkar येथे 7:46 pm