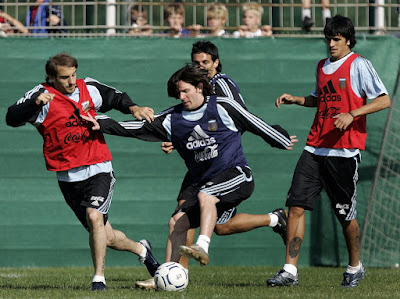 27 Crore people active in Football
The success of FIFA's extensive investment in the development of football worldwide seems to be leaving its mark not only with regard to increasing match attendances and TV audiences but also with regard to the number of people around the globe who actually play the game according to the latest figures.
With 265 million male and female players and a further five million referees, coaches and other officials, a grand total of 270 million people, or four per cent of the world's population, are involved in football. These are the impressive findings of the Big Count 2006, a FIFA survey of its member associations (207 at the time), which, having first been conducted in 2000, was repeated last year with the same criteria to provide an interesting insight into the growth of football worldwide.
"Football's popularity remains undiminished and is actually increasing," reflected FIFA President Joseph S. Blatter with satisfaction on the results of the survey. "If you count the relatives and close friends of active participants in football, who share in their passion for the game as fans and support them in other ways, the total number is even more impressive: well over a billion people worldwide are involved in football - at all levels of society and across all borders."
Here are some of the most important findings of the Big Count 2006:
* The overall total of 265 million male and female players is almost ten per cent higher than the number recorded six years ago (242 million). Of the 265 million, 26 million or around ten per cent are women.
* Since 2000, the number of registered male and female footballers has increased by around 23 per cent to over 38 million.
* The growth in women's football is particularly striking, with the number of registered players up 54 per cent to 4.1 million, while the number of registered players in the men's game has likewise seen an increase of 21 per cent to 34.2 million.
* The number of unregistered occasional players, which was first recorded in the previous Big Count study, is up seven per cent to 226 million.
* There is now a combined total of over one million futsal and beach soccer players (both male and female)
* In terms of regional differences, the AFC (85 million footballers) has a clear lead over the other five confederations (UEFA: 62 million; CAF: 46 million; CONCACAF: 43 million; CONMEBOL: 27 million; OFC: 0.5 million). However, if the proportion of footballers to the total population is taken into account, CONCACAF, CONMEBOL and UEFA are ahead of the other confederations with seven per cent each.
* The number of clubs (301,000) is similar to the figure recorded in 2000. That said, the total number of teams (1.7 million) has increased by approximately 200,000. The data for Big Count 2006 was collated in the first half of 2006 using a traditional questionnaire and an online survey and achieved a response rate of over 75 per cent. FIFA used Big Count 2000, a UEFA survey from 2005 and other internal surveys to supplement missing data from associations and as a plausibility check. The study was scientifically observed by Lamprecht & Stamm SFB AG, a social research company based in Zurich.
द्वारा पोस्ट केलेले ashishchandorkar येथे 9:37 pm

from yesterday i dont know what happen to my computer.all security services are disable and lots of spam are comping on my computer.my anti virus is showing Trojan.Conficker.c.gen virus but not able to delete.help me to delete this virus. [url=http://gordoarsnaui.com]santoramaa[/url]

Awesome blog, I hadn't come across ashishchandorkar.blogspot.com earlier in my searches!
Keep up the fantastic work!

Sorry for my bad english. Thank you so much for your good post. Your post helped me in my college assignment, If you can provide me more details please email me.

This is a message for the webmaster/admin here at www.blogger.com.

Can I use some of the information from your blog post right above if I provide a backlink back to your site?