Mayawati is Back in Action... 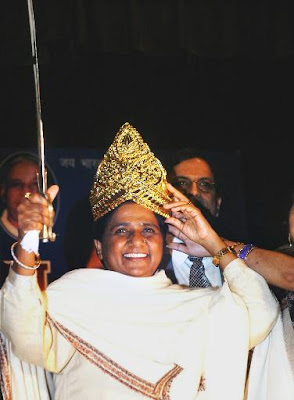 It was neither shock nor surprise for anybody. Mayawati’s Bahujan Samaj Party (BSP) will emerge, as single largest party was general perception. It happened also like that. But Mayawati got more than expectation. BSP will get maximum up to 165; this was assumption of Most of the exit polls and media persons. But Mayawati gone beyond that and crossed the magic figure of 202.

This is the first time when any single party has crossed the mark of 190 seats. In 1993 when Kalyansingh was in full swing after debacle of Babri Masjid, Bhartiya Janata Party got around 193 seats. After that no party has crossed that mark. BJP’s graph was declining and Samajwadi Party and BSP’s highest figure was not more than 160. But this is the first time BSP not only crossed that 190 figure but set new record by winning more than 202 seats, which is required for majority.

Till last assembly election Mayawati’s BSP was limited to Dalits and backward class only. But after that she knew that if she adhered to only Dalit politics she wont won the elections on her own. So she started to appease the upper caste voters, mainly Brahmins. In 2004 Lok Sabha election and now in Vidhan Sabha election also she gave many upper caste candidates including Brahmins. In this assembly election she gave about 155 upper caste candidates, in which number of Brahmins candidates was around 87. This drastic change in BSP’s policy was shocking but accepted by people of Uttar Pradesh.

Once upon a time BSP’s famous Slogan was

But now the situation is changed and Maya has now hugged the Brahmins and Baniyas. In UP percentage of Brahmins are around 12 to 13. Upper caste vote percentage touches to 20. This is the figure you cannot ignore in politics if you want to become Chief Minister. Maya knew that whatever decision she takes there will be no impact on her Dalit vote bank. So she gave tickets to Brahmins and Baniyas where this caste has majority votes. With this move of Maya BJP and Congress got major jolt as these parties are supposed to be parties of upper caste. Maintaining own vote bank Maya created vote bank of another caste. Neither BJP nor SP was able to do this. That’s the reason why Maya got majority and other two parties unable to cross hundred.

Another thing is that people were tired to Mulayam Singh’s government. This govt. gave some scholarships and aids to students, women and people of backward class but cadre of Samajwadi Party was indulged in extortion, crime and many illegal things. Voters were not happy with this. They wanted change.

On the other hand BJP has no powerful leader, which would be alternative to Mayawati. Kalyan Singh was popular after Babri debacle. He was not only popular in BJP cadre but he was also popular in general public. But when he became Chief Minister again in 1996 his popularity was on declining track. He was expelled from BJP. He was unhappy with then Prime Minister Atal Bihari Vajpayee. So alleged Vajpayee and other senior leaders including Lalkrishna Advani. He also took U turn in Babri Masjid Debacle. That’s why Kalyansingh was not popular in BJP cadre and general public also.

Other leaders like Kalraj Mishra, Lalji Tondon and Kesarinath Tripathi were limited to one caste only. That is Brahmins. Vinay Katiyar was also side tracked after Kalyan Singh’s return to BJP.
Considering all this aspects only alternative before UP people was Mayawati and her BSP. That’s why BSP not only become no. 1 Party in Uttar Pradesh but she got simple majority. This was the indication that people of UP are tired with `JOD-TOD KI RAJNITI` and they want stable government. So they give opportunity to Mayawati to run govt for five years without any hurdle.
द्वारा पोस्ट केलेले ashishchandorkar येथे 5:18 pm

I agree
Dail+ Brahmin=crown for maya
The BSP earlier slogan tilak, taraju aur talwar, maro unko jhoote char but new slogan is Haathi nahin Ganesh hai. Brahma,Vishnu, Mahesh hai This was probably what worked in UP's new queenmaker's favour.
In fact, the gain for the BSP is in a way loss for the BJP party make very poor perfornce not pass 50 also.
tis is victory of maywati's smart electorial taicti's.
thank's for up people also who gave clear support to 1 party.aviod any hosrtrading.
onkar

No comments,becoz i m a non political person. I dont vote at all according to section 49-O of the Constitution of Republic of India.

To me crows are black everywhere. Some are lucky for queen at the Bukingham Palace or some are needed for the last rituals of Hindu dead.

But whatever i read from the artical, Ashish has good knowledge. But,Ashish please type in Marathi. You know marathi best.

POLITICS IS THE BEST AND NON RETIRING BUSINESS. AND THE BEST BUSINESS-PERSON WINS.

agree with prasad - make this a marathi blog.

Hi Ashish....Nice blog..... i will judge Mayawati only by her performance. We have had parties getting landslide majorities but none them had done anything worthwhile for the people of Uttar Pradesh. Hope she will show the same enthusiasm that she showed in winning the elections when it comes to ruling Uttar Pradesh.