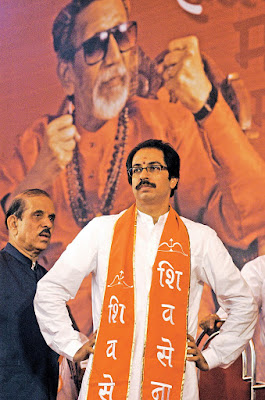 Though he has so many critics and everyone is saying he is not capable to lead Shivsena, but he has proved that Uddhav Thackrey is the only person who can lead Sena, as Balasahaeb is not in condition to lead.

After exit of Narayan Rane and Raj Thackery, Shivsena got major jolt. Shivsena leaders Chagan Bhujbal and Ganesh Naik were also quit Sena few years back. But that time not Sena but those leaders found in trouble. But here condition was exactly opposite and Sena was on back foot as Raj and Rane are mass based leaders. So many Sena leaders and MLAs also quit Sena with their workers. Those workers were not only from Konkan and Mumbai but also from all over Maharashtra.

After this drama Rane supporter MLAs quit Sena and joined Congress. Therefore voters and leaders faced by election. In Malvan, Sangmeshwar, Rajapur and Vengurla Rane supporters won. Malvan and Vengurla was cakewalk for Rane but Sangmeshwar and Rajapur was quite tough for Congress. After that Sena maintain their Shrivardhan seat with support of Peasents and Workers Party. This was like earthquake for Rane’s camp.

Chimur and Daryapur was close battle as Rane supporters won with close margin. Here dispute between Sena and Bhartiya Janata Party was reason for their defeat. But after this Sena camp was in Cheers mood.

Mumbai Municipal Corporation election was litmus test for Sena, Rane and Raj also. Everyone was thinking that Sena would get major jolt as Rane and Raj quitted Sena. But giving shock to everyone Sena got majority in MMC. Thought number of Sena corporaters decreased and BJP corporaters increased saffron alliance got majority with support of independent candidates. This was 1st great victory for Uddhav and for Sena also. After that everyone gets idea of Uddhav’s leadership techniques and the way he is leading Sena.

Like last municipal election also he didn’t give tickets to around 55 sitting corporaters. In last election also about 35 corporaters wont get another opportunity. Because of this though many people were upset with performance of their corporater voted for Sena as they got new face from party. Another reason was Marathi factor was also helpful for Sena’s victory.

As this was not enough for Rane, Ramtek Loksabha election results brought Rane to the earth. Ranjit Deshmukh contested the election against favourism to Rane in congress party. He got around 40 thousand votes and Sena candidate victory was confirmed. Sena move their all MLAs, corporaters and workers to Ramtek and made this election of prestige issue. Ramtek win confirms that, here after it won’t be that much easy for Rane.

Uddhav’s style of working is different from Raj or Rane. He is not aggressive as Balasaheb. He is not good orator as Raj. He has not bunch of workers as Rane has. But he is changing work style of Sena and which is appropriate for new era. Though many workers of Sena not happy with his working style, many people are with him. He is taking issues like Sugercane or Cotton prices, Electricity shortage in rural parts of Maharashtra and other people related problems. That’s why roots of Sena are going more and more deep.
द्वारा पोस्ट केलेले ashishchandorkar येथे 10:56 pm

Jai Maharashtra Ashish..
I read this article, I Like it.. it's true that despite all hurdles Udhavji is wining..and I think winning stratagy is the main aspect in number game politics. I hope this Vijaypath will not stop till next Vidhansabha..Bhagava phadkanarach...
Jai Maharashtra
Dhananjay.

Udhav Thackery is next jenration leader.he has some clear idiea's in his mind about party.I think we evalaute udhav thackery as a seprate leader not as son of Balasaheb..he made many mistake as a politician..every time he got favour of balasaheb..last 2-3 year he saw very bad phase..now some time for him to chair.. just see how he guide the party for coming elections

vivek said...
This comment has been removed by the author.
10:30 am

vivek said...
This comment has been removed by the author.
10:32 am

vivek said...
This comment has been removed by the author.
10:33 am

vivek said...
This comment has been removed by the author.
10:34 am