Everything for Political Mileage? 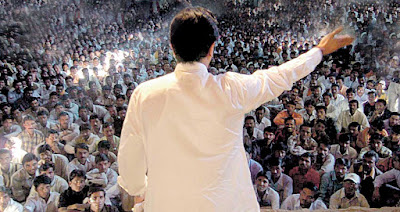 Hardworking Biharis : Why to Beat them?

Every state is against them. Wherever they go they are beaten hardly with sticks. Not only in Maharashtra but in Bengal, Assam and Delhi also natives are against them. Yes I am talking about Bihari people who work hard, go anywhere in India for work and their financial expectations are very low.

Localites are against this Biharis. Not only Shivsena but Communist, Assam Gana Parishad and Congress also against Bihari people in some states. Recently Chief Minister of Delhi Mrs. Sheela Dixit gave controversial comment against Biharis in Delhi. Bihari came to Delhi and because of them conditions are worst. Every Bihari politician was upset with this statement and there was so much pressure on Congress that they ordered Mrs. Dixit to pull back her statement.
In West Bengal and Assam also Biharis were not only beaten but they were killed in some areas as very much anger was aginst them. In Assam condition was so worst that it was Hindi-speaking state were thinking of boycotting the recently held National Games there. But government gave assurance to particular associations and they participated in games.

In Maharashtra one cannot tell another story about Biharis. Few years back when Raj Thackrey was in Shivsena, at that time he had beaten the Bihari candidates who were present for Railway Exam at Kalyan-Dombivali. Shivsena had beaten them so badly that issue was raised in Parliament. Sena was firm on stand they continue their beating programmes all over Maharashtra.

Now Raj Thackrey has left Shivsena but he is still working on his agenda. They again beat Bihari candidates who were present in Pune for Railway Examination Center. This is because advertisement of this Railway exam was not given in any Marathi newspaper. It was published in other parts of country and that’s why only two Marathi candidates were present for exam and this is not done, as per Maharashtra Navamnirman Sena’s viewpoint.

One point of MNS is correct that such advertisements should be given in Marathi newspapers or we can say Indian language newspaper. Because of this everybody will get opportunity to appear for examination. This point is valid. But is it right to go at exam center and beat Biharis or outsider students? I think he should again think over this.

Another thing is that government is publishing Employment News, which is a weekly and you will get n number of advertisements from various departments of Government of India. Those who are really interested and eager for employment are regular readers of such newspapers and they will get such opportunities. Why don’t Raj Thackrey tell their supporters or workers of MNS to read `Employment News`? Do they have any problem with English reading? Or they just want to get political mileage through such events?

Everybody will be agreeing that localities should get first priority. Shivsena has also done lot of work in this issue with `Sthanik Lokadhikar Samiti`. They have also protested in the favor of local peoples. Fighted against Multinationals and out of Maharashtra companies, but they had prepared the candidates properly. Given appropriate training to them. Why don’t Raj work on this line.

One more point is that Raj has opened `Shiv Udyog Sena` when he was with Balasaheb Thackrey. That time he collected lot of money in the name of Shiv Udyog Sena. To provide employment for youth was motive behind this. Motive was good. But did that motive really came in reality? What happened of that money and how much employment was generated? Mr. Raj you should give answer to this questions and then you go ahead with agenda of beating peoples. You used public money for that Shiv Udyog Sena and you should be answerable to people.

Keep aside all this things and let us discuss the mentality of Bihari peoples. Firstly as there are not many opportunities in Bihar they are ready to travel in any part of country for employment, for work, for money. Marathi youth is ready for this travel? You can observe any bihari worker or labour, he is working for 10 to 12 hours sincerely withouth doing any time pass. And most important is that they are cheap compaired to Marathi or any other labor. Their charges are 50 percent less to any other worker. This is the reason that why Bihairs are more popular than local workers and labor.

Why should go too far. Lets take example of Biharis in Mumbai. They come all along from Patana or remote parts of Bihar. They drive taxis or work as labor with some contractors. They sleep on streets, on the roof of shops, on footpaths, in Taxis. Take bath in Public bathrooms. This kind of compromising mentality is not of any Marathi youth of worker. That’s why Mumbai is flooded with Biharis and Bhayyas.

When I was in Assam the cycle rickshaw Puller were all Biharis. They will get hardly two to three rupees after one to two kilometer paddling. But they are working hard in those conditions also because they have no alternative to hard work. In West Bengal also most of the port workers and Collies are Biharis. Reason is same as above.

Though they are creating problems for native youths or workers, there is no alternative to Biharis. Economics is with Biharis and that’s why no one can throw Biharis out of their state. That’s why instead of beating Bihairs Raj Thackrey should think over this and reframe the agenda. Beating them should not solve any problems.
द्वारा पोस्ट केलेले ashishchandorkar येथे 8:26 pm

"Bihari" a person from the state of Bihar, is targeted everywhere. Rightly or wrongly - both. Primarily, Bihar is unexplored land of minerals and other natural resources. Secondly, it is economically poor because of the first reason mentioned in my comment. Thirdly, coal mafia active in Bihar. Now because of these reasons, a Bihari cannot survive in his own state. Contracdictory, the same Bihari is hardworking and intelligent person. Today South Indians are considered to be most intelligent people in the world (Bill Gates). If given a chance, a Bihari certainly does better than other statemen. But again due to the economic and geographic apidemic in Bihar, a person from Bihar agrees to slog even in the wages substandard to the minimum wages. Furthermore, the same Bihari being intelligent succeeds in IAS and IPS exams the most. All in all, the situation makes a Bihari, shrewed. And this SHREWEDNESS overshadows the rest. And thats the root of the problem. Personally I feel, there should be no reservations at all in any field to any one. Come on, we all are Indians - citizens of same country. But as rightly stated by ASHISH CHANDORKAR, it is all politics, by vote bank, of vote bank and for vote bank. But if one really wants to know about Bihar and Bihari, one must visit Bihar and take the risk of staying there for livelyhood. I am certain that this jealously shall end on positive note.

Brother, I see betterment in your writing knowledge of English. But, When you are writing an Article for public and presenting such a critical issue like attacks on BIHARIS, you should take care of avoiding the first person terminology in writing. You are not winner of Booker's prize yet. Do not mind brother, but it looks like you are arrogant or authoritarian through your writings. I am sure you shall keep this tip in mind for next time. all the best dear.

Mr. whatever you are..I am very angry on you but I know if I abuse you it will not serve any purposr and also its against my Bihari culture and traditions which I am really really proud of.
How can u dare write so?
I have reasons to believe now that the maharashtrians like you( not all..I have many good friends)the most uncivilized persons of the country thats why u dont even know how to talk.This most of the non-majharashtrians accept.First u targetted southies,then rajasthanis,thn bengalis and then North-Indians. and do u think that u will be spared. Anger is only increasing against maharashtrians all through India due to persons like you.In its own home even Dogs are like lions. And we bhiyyas venture all over India for education,tourism,job etc.North-Indians want to take revenge of all these. And if u are so concerned of yr identity which I dont think is different from Hindu-identity,then why dont u separate from India.We are heart of India.We have contributed most towards the nation.
And why yr eyes see only thos bhiyyyas who are little poor? Why dont u see those biharis etc. who are CEOs of manuy-many enterprises all through the world? TIME magazine has included only 3 Indians in the list of most strong and rich persons of the world. Sonia Gandhi,Mittal and Anil agrawal.Mittal is from UP and Agrawal from Bihar, a local baniya who grew to be an international business-tycoon.
Just see every years list of IAS men,some 25% seats are filled by biharis fillowed by UP men. Maharashtra is no whwre.Just come to the IIT campus some time,u will realise the fact.Forget about IITD/IITK even in IITB biharis are in great numbers every year..far ahead than u guys.Same holds true for media houses.STAR CEO shankar is a bihari.
And whats yr history tell me. Bihar had the reachest history in India. Dont forget, Magadh dynasties who ruled India for many-many centuries...Asoka,Chanakya,Aryabhatta,Budhha,Mahavira,Guru Govind Singh,JP,Rajendra Prasad are just few Gems to remind.
I know you are among those who are simply fanatic about their cultural indentity. Same thing holds true to Bihari`s pride and histoty also and also for the fact that theye are one of the most competent professions of India as recently said by Dr.Kasturiranjan of ISRO.Go to ant North-Indian Universities..topper will be biharis most of the times.But u will simply not see bacause you want to see only those who are on the roads.Their families send them here to collect money for the breads..but you cruel guys having mentality of butchers are insulting and beating them.Shame on you man.SHAME!!!!
Please learn from the same Hindu-textures which you think makes u supporters of Shiv-sena that,that labour should be respected..whether its physical or mental.
And han one more thing I have observed all the toilet cleaners are also from maharashrta and also those who have committed suicides in Vidharbha in lakh of numbers.At least not a single farmer has committed suicide in Bihar/UP.
If u are really concerned about maharashtra then please go to some village of Vidarbha and try to wipe their eyes.
And for your kind information I personally have collected lakhs of ruppis towards this motto under AOL and many contributers are from big Biharis bussiness-men also settled in Mumbai.
I think and believe that we are pretty patrotic men and so better than many confused souls like you.
This hatred will lead you to nowhere.

Ashish one of the good article...But when ur wrting take care of some which ur written in ur article on Raj Thackrey and Bihari people...
When ur writting some article, don't be angry as we r Journalist give the analysis of the situation unbiasly....except this thing the type of the article is very good. I appreciate u...keep it up...as ur one of best friend i gave this suggestion....
good improvement...keep it up...

they are real hardworker thats y there are more than 60% ias officers are from bihar, and also engineering colleges or any other professional colleges are flooded with biharis...

it was really nice